The twins happen in the same family due to genetic predisposition but there are some external factors that can contribute to a twin pregnancy, such as taking a medication that stimulates ovulation or through in-vitro fertilization.

When a man has a twin, it does not mean that his wife will have twins, because the genetic factor is totally dependent on the woman. 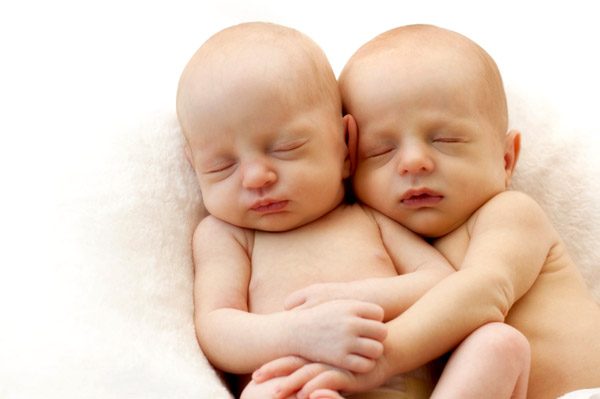 Likely to get pregnant with twins

Not every woman can conceive of twins naturally, because the main factor in making this happen is that she is the twin of another brother or sister. In this case, the woman will mature 2 eggs at once, and will have twins, but not identical, children.

The chances of having identical twins are equal for all women, because in this case, initially there was only one egg that was fertilized by a sperm, but in the first hours of conception, it divided into 2, giving rise to two identical babies, not being influenced by genetics, occurring by chance.

Remedies for getting pregnant with twins

Pregnancy remedies, such as Clomiphene, are not only prescribed for women to become pregnant with twins. This type of medication is prescribed to stimulate ovulation, during a fertility treatment, which lasts many months, and which should always be directed by doctors specialized in human reproduction.

Tips for getting pregnant with twins

There are some tips that can help increase the chances of having two twin babies, but different at once, such as:

Facts not proven by science

Taking folic acid does not guarantee the pregnancy of twins, because this is a dietary supplement suitable for all women who are trying to conceive or who are already pregnant to protect the formation of the baby’s nervous system.

Eating more dairy products like milk, yogurt, butter and cheese are good sources of calcium, but there is no scientific evidence that it can interfere with ovulation;

How is the pregnancy of twins

Twin pregnancies are considered risky pregnancies because there is a greater risk of preterm birth and eclampsia, which is a dangerous rise in blood pressure.

Because of this, the pregnant woman with twins should have some special care during pregnancy such as attending all prenatal consultations and having a balanced diet. Sometimes the obstetrician indicates that the woman needs to rest at around 30 weeks of gestation, so that babies can grow and gain enough weight to be born healthy.

Tips for Getting Pregnant with Endometriosis